When words like “progressive” and “right wing” start to pop up, it’s time to get skeptical about motives. Some people appear to be using current gaming commentary, driven by already politicized terms like “Social Justice Warriors” and “GamerGate,” to color their party politics as not only superior but victorious.  In party politics, the other side — those inferior fools! — is always on the brink of destruction because of extremists within its ranks.

Last month Liz Ryerson, one of the more thoughtful and provocative critics out there, published a piece called “On Right-Wing Videogame Extremism.” Her reason for publishing the piece was understandable, and although Ryerson never used the term “right wing” in the body of the article, the inclusion of the term in the title suggested party politics, the idea that your side is right and about to win once and for all. Sure enough, Ryerson’s conclusion alluded to the self-destruction of these supposed right-wing people. This sentiment fell in line with the “gamer is dead” wishful thinking that was recently propagated. In this propaganda, the main idea is that gamer = right wing = harasser/hacker.

Again, one can understand why Ryerson or anyone would want harassers and hackers to disappear, but the reality is that harassment and hacking are not going to decline until the powers that be do something about them (or until all harassers/hackers start behaving like Gandhi, which I don’t see happening anytime soon). With this in mind, one can conclude that since the actual “right wing” is here to stay, it will not look good in gaming due to being tied to harassment and hacking. Thus, if anyone identifies with “the right” (which is, speciously, equated with “gamer”) or subscribes to any position that could be described as “conservative,” that person might be guilty by association — the kind of anti-intellectual crap that makes contemporary party politics an embarrassment.

I was relieved to see Ryerson write a follow-up piece called “On ‘Gamers’ and Identity,” as its reasoning and conclusion reject the party politics of the “Right-Wing” article: “[A]t some fundamental level we’re all in this together.” Still, Ryerson’s more articulate analysis cannot undo the damage that so many have caused. Historically, one could probably trace the party politics of gaming back for years, but a big publication helped trumpet its existence: the June 2014 issue of Reason, a libertarian magazine whose cover proclaimed, “How gaming is making America freer — and more fun.” (Notice how “fun” in relation to video games has, ridiculously, become a bad word in “progressive” circles due to party politics.)

Reading the June 2014 issue of Reason during this current SJW vs. GamerGate “debate” is almost surreal. The magazine issue seems prophetic with its cover image: 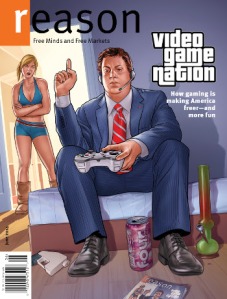 With one idiotic swoop, Reason’s cover not only propagates the party politics of gaming but also plays into the stereotype that “libertarians,” “right-wingers,” and “gamers” are young men who have out-of-line priorities and turn a deaf ear to women. Inside the magazine is the cover story titled “The Gamer Congressman: Is Rep. Jared Polis the First in a Wave of Libertarian-Leaning Video Game Enthusiasts?” Interestingly, the cover story doesn’t confirm the stereotyping of the cover image; it even has a section called “Rise of the Gamer Dad,” which specifically refutes the gamer stereotype.

Instead, the story tries to create a new gamer stereotype using Rep. Jared Polis. Polis is described as “the first out-and-proud gamer in Congress” and a “libertarian-leaning Democrat.” The story later refers to a poll of 1,011 American adults. According to the magazine, the poll indicates that gamers, as opposed to non-gamers, “believe in greater numbers that people should be allowed to smoke marijuana, gamble online, consume caffeinated energy drinks, buy home genetic testing kits, and manufacture their own 3D-printed guns.” Thus, this more libertarian tendency of gamers ties back into the cover’s claim that “gaming is making America freer.”

By evaluating Reason’s “libertarian” evidence, we can see that party politics in gaming is silly. First, Reason admits that only 14 percent of the polled 1,011 adults are classified as gamers. Fourteen percent of 1,011 is only 142 rounded up. Considering that millions of people play video games in the United States, how can one assume that 142 adults can reveal the political tendencies of millions without a test for statistical significance? But let’s assume that those 142 adults do represent the political tendencies of “gamers.” How do these tendencies make America “freer”? Will libertarian gamers cause marijuana to be legalized in all 50 states?

Let’s examine party politics logic from another gaming perspective. Would a majority of “Social Justice Warrior” gamers make us safer? Would they enlighten all of us? Sadly, the party politics of gaming frames these ideas as statements or assumptions rather than questions.

In its rejection of intellectualism and cooperation, party politics in gaming is popular because it appeals to hurt feelings and emotions. Don’t be fooled by the trendy but unoriginal statements of Milo Yiannopoulos and Dan Golding. Their “honesty” and unthinking allusions to death and war favor egotism over respect, maturity, and knowledge. Our collective outrage presents the perfect opportunity for phony leaders to emerge.